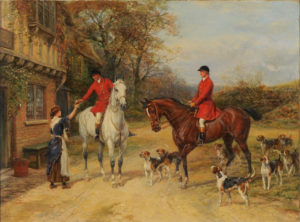 Born in Chichester in 1842, Heywood Hardy was one of the most famous and influential painters of sporting genre and animals of his day. From a family of respected artists – his father James was a landscape painter and his elder brother, James Hardy Jnr. a successful painter of genre, horses and dogs, often in the English and Scottish Highland countryside.

On leaving home at the tender age of 17, he earned his living as a painter of animals, before borrowing money from his brother to travel and study in Paris at the Beaux Arts under the tutorage of the artist Pieise. It was during his time in France, at the height of the Impressionist Movement, that his work became more free and loose, although he didn’t completely abandon the more traditional style of his British contemporaries.

Heywood Hardy returned to England in 1868, and found his sporting scenes were in great demand. He enjoyed the patronage of many wealthy patrons, among them, the Sitwells of Renishaw, who commissioned him to paint portraits, sporting scenes and studies of their favourite animals. Although the invention of the camera for popular use in 1888, was more expedient and accurate for capturing the image, it could never replace a beautifully painted painting.

Heywood Hardy continued to enjoy a steady flow of commission work, but he was more fulfilled painting genre scenes, usually with a sporting influence. In 1870 Heywood Hardy and his family moved to St. John’s Wood, London – an area popular with artists of the day. He enjoyed considerable success in London and his career flourished, exhibiting at the Royal Academy, the British Institution, Suffolk Street. The Old Watercolour Society and the New Gallery. Heywood Hardy was elected a member of the Royal Institute of Oil Painters, the Royal Scoiety of Painters and Etchers and The Royal Society.

A Halt at the Inn is a charming example of Heywood Hardy’s romanticised paintings, with two huntsmen taking a break at a country inn, eagerly accepting drinks from a pretty young girl – probably the innkeeper’s daughter, one horse is obediently standing still, while the other is gently reined in – the pack of hounds looking expectant for some well earned refreshment – all eyes on the girl with the drinks.

Heywood Hardy spent his later years in West Sussex, and at the age of 83 he caused considerable controversy by painting a series of eight panels for the chancel of Clymping Church, to mark its’ 700th aniversary in 1952. The religious scenes depicted Christ walking on the Sussex Downs and farmland, mingling with figures, believed to be residents from nearby villages.

Heywood Hardy was also an accomplished illustrator, with his work being published in the Illustrated London News and the Graphic.