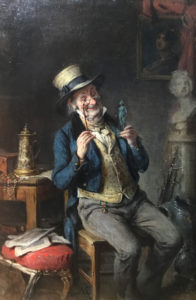 Hermann Kern was a painter of portraits and genre, specialising in painting old men in cluttered interiors.  It was a celebration of man in the twilight of his life and he had the ability to bring out the character of his craggy old men, often adding a hint of humour and a twinkle in their eyes.  He painted in fine detail, producing works of a high quality and finish.

In this fine work, The Connoisseur, Hermann Kern depicts an aging dandy, with his top hat, frocked jacket, brocade waistcoat and kerchief, sitting happily on his chair, admiring a figurine through a pair of lorgnettes, surrounded by his other treasures – a decorated tankard, jewellery, engravings, a suit of armour and a collection of swords resting against an alabaster column and bust. It is a moment in time, a private scene of quiet contentment, of an elderly gentleman taking great pleasure from his favourite things.

Hermann Kern settled in Vienna, where he made his debut at the Academy in 1880.  He was also greatly influenced by the Munich school of painters and he exhibited at the Munich Academy. His varied paintings are to be found today in many fine collections at home and abroad.