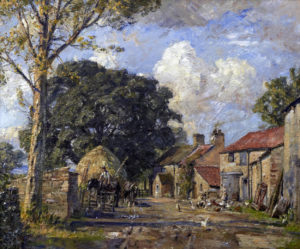 Herbert Royle, a British impressionist painter of landscapes, was born in Manchester, and studied art at the Harris Institute in Preston, under John William Buxton Knight.  He lived in Southport, before moving to the Yorkshire Dales, settling first near Bolton Abbey and then moving to Nessfield near Ilkley, where he remained for the rest of his life.

His style, showed the influence of his tutor, with brave brush stokes, the use of heavy impasto to create texture to his works, the use of sunlight and shadows and bold colours.  A shy and retiring bachelor, Herbert Royle painted his beloved Wharfedale in all seasons, with snow covered fields, workers harvesting the golden corn, sunlit summer landscapes and the rich brown and reds of the English autumn.  He painted ‘plein air’, around the dales, easel strapped to his bicylce and with a hot potato in his pocket in the winter months, to warm his hands.

Herbert Royle’s other great love was the Scottish Highlands – he holidayed there each year, painting the Scottishmountains, glens and lochs in all their glory.  Such was his love of  Scotland, that he had his ashes scattered there, after his death in 1858 in Nessfield.

Enjoying considerable success during his lifetime, he exhibited firstly in Liverpool and then at the New English Art Club in 1892 and from 1894 the Royal Academy, where he showed for about 50 years.  He also exhibited in Scotland at the Royal Scottish Academy, as well as the Glasgow Institute.

A retrospective exhibition of his work was held iat the Cartwright Memorial Hall, Bradford in 1947 and Herbert Royle’s paintings are represented in several public collections, including Leeds, Bradford and the Atkinson Gallery at Southport.  Hi spaintings are now highly sought after both at home and abroad.