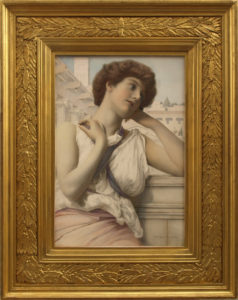 Painting in a neo-classical, pre-Raphaelite style, Henry Ryland specialised in stylised and highly finished watercolour paintings. He almost always depicted classically dressed attractive young women reclining against marble pillars or terraces – much in the manner of his contemporaries, Rosetti, Alma Tadema and J. W. Goodward. Unlike his contemporaries, though, Ryland very rarely painted nudes, instead preferring his models demurely draped, as in this painting, Una.

Born in Biggleswade in Bedfordshire, Henry Ryland studied at the South Kensington Art School and at Hatherleys in London and then at the Academie Julian in Paris under Gustave Boulanger and Lefebvre. He exhibited at the Grosvenor Gallery, the Royal Academy, the New Watercolor Society, Royal Institute of Painters in Watercolour and the New Gallery.

Henry Ryland was also a successful designer of stained glass and a decorative illustrator – during the 1880s and 1890s he created woodcut illustrations for the English Illustrated Magazine and designed the cover for The Quiver magazine. Ryland’s work has long been popular in print form – during his lifetime and still today.