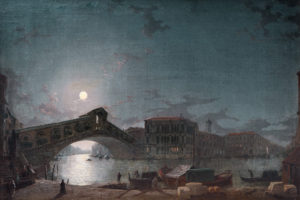 ‘The Rialto Bridge Venice, by Moonlight’

Grandson of Abraham 1756- 1812, Son of Sebastian 1790-1844. Painted landscapes, especially by moonlight
Painted moonlight scenes along the Thames, other English Views and also Venice

Henry Pether (1828-1865) is best known for his moody, atmospheric moonlit landscapes. Both his father Sebastian and his grandfather Abraham painted in the same genre, but Henry is widely accepted as the most talented of the line. Henry Pether mostly painted scenes along the Thames, along with other English views such as popular attractions like Tintern Abbey or York.

Henry Pether’s work has often been compared to that of Atkinson Grimshaw for its ability to evocatively describe the nuances of moonlit scenes. The Rialto Bridge Venice, by Moonlight depicts a characteristic luminosity and trueness to tone and colour as well as an appealing composition. Similarly, Pether enjoyed the play of moonlight on water and often included water in his paintings. The moonlight enabled Pether to combine precision and realism with romanticism that would not have been possible in daylit scenes.