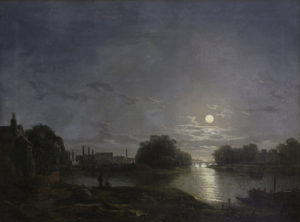 Henry Pether was born into a family that was well known for their artistic talent. His father Abraham Pether (1756-1812) established a reputation as a specialist painter of moonlight landscapes, influenced by the earlier Dutch masters and he is often referred to as ‘Moonlight Pether’. Born in Chichester, both the father and son were inspired by the work of the 18th century Dutch masters, whose skilful paintings, illustrated the illuminated effect of the light reflection on the water, that they both admired.

The beautiful oeuvre, The Thames by Moonlight is an exquisite example of Henry Pether’s work. He has successfully used the chiaroscuro technique of light and shade to great effect in his painting. The star of the show is naturally the full moon, which kisses the clouds, and illuminates the sky, and the bridge beneath. The moonlight shimmers across the still waters, giving the impression of a path of light stretching from the bridge to the boats on the river shore. On the left bank, the buildings and the mills, with their tall chimneys are painted in fine detail, against the gentle backdrop of the night sky. The two solitary figures in the foreground are silhouetted against the tranquil waters of the river. Henry Pether has successfully re-created the mysterious atmosphere of a moonlit evening.

Abraham had another son, Sebastian, who was also inspired by his father’s artistic interests and he too painted moonlight scenes, however, it is generally accepted that Henry was by far the most talented and capable artist. His work is far superior in terms of composition, technique, atmosphere and colouring, surpassing both his father and brother.

Despite his unique talent, Henry Pether died in the workhouse in Chelsea in 1865