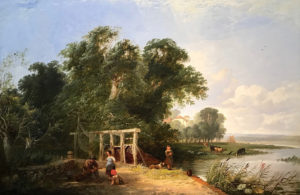 Henry John Boddington was a London painter of landscapes and river-scenes, mainly along the Thames, in the home counties, Wales and Yorkshire. He was the second son of Edward Williams and a member of the famous Williams Family of Painters. However, after his marriage to Clara Boddington in 1832, he used the name Boddington, so as not to be confused with other members of the family.

The famous art critic Ruskin praised his pictures for their honesty and true love of the countryside, and this is well illustrated in his painting Eel Traps on the Ouse. This delightful scene, set on the banks of the Ouse, depicts a couple of children watching a man, as he deftly fashions a new eel pot from reeds, for his eel trap. Henry John Boddington and his brothers were known for their wonderful trees, and their twisting branches and rich foliage set under manificent skies, with rolling clouds illuminated from behind with a soft sunlight. Henry John Boddington and the rest of the Williams family, enjoyed considerable success during their lifetime, finding an eager market amongst the emerging Bourgeoisie, who were furnishing their grand city homes with scenes of the countryside they left behind.

As well as commercial success during his lifetime, Henry John Boddington exhibited at the Royal Academy in London 1837-1869, at the British Institution, but mainly at Suffolk Street, where he showed 244 works.