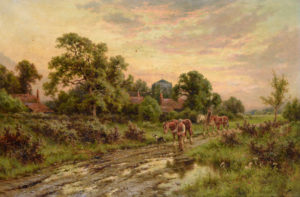 Henry H Parker was a late nineteenth and early twentieth century London landscape artist. His style was greatly influenced by the impressionists of the time, using bold colours and fluid brush strokes to produce his lush and tranquil landscapes and riverscenes. His paintings are bright and sunny, with dramatic skies,  using the free controlled techniques favoured by the emerging and ever popular impressionists, providing a welcome relief from his more traditional predecessors.

The End of the Day is a fine example of Henry H. Parker’s  work, with its wonderful choice of subject matter, the impressive sky with the setting sun giving the clouds a rosy glow and the light reflecting in the pools of water on the rugged cart tracks below. Henry H Parker has used free, but controlled brush strokes, a bold application of bright paint, giving texture and depth to the painting. In the painting, a ploughman slowly leads his weary horse back from the hayfields, after a hard days work, followed by a fellow worker, astride his horse and guiding a third. Only the sheep dog appears to have a spring in his step, as he leads the group as they wend their way home for a well earned rest and hearty supper. It tells of a time gone by, where life was hard but rewarding, a scene of nostalgia and above all, a celebration of our great British countryside.

Unusually for an artist of Henry H Parker’s caliber, he doesn’t appear to have exhibited at the major exhibitions at the time. The simple explanation seems to be that his beautiful landscapes, with their desirable subject matter and executed with impressionist brush strokes and vibrant colour, found a ready market with the rising bourgeoisie, eager to fill their smart town houses with reminders of the life they left behind in the country.