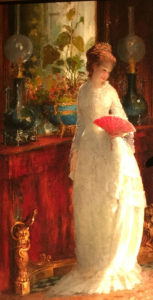 Hendricus Jacobus Burgers was born in Huissen near Arnheim in 1834. He was the pupil of the sculptor Louis Royer and the famous Dutch artist Josef Israels. Burgers travelled to The Hague, before settling in Paris, where he died in 1890.

Before the Opera is set in an elegant Parisian salon, decorated in the grand style of emerging bourgeoisie, during the period later referred to as La Belle Epoch. A period in the European history that is conventionally dated as starting in 1871 and ending when World War 1 began in 1914. It was a period characterised by optimism and peace in Europe, and in Paris it allowed the arts to flourish. The famous Paris Garnier was built in 1861 to house the Paris Opera – the opulent style and architecture, synonymous of the era. The stylish lady in a flowing gown of white lace, a red fan in one hand and her invitation in the other, demurely awaits her escort to the opera. Her hair is elegantly dressed is in a chignon, held in place by a gilded comb. She epitomises the fashionable Parisian ladies of the upper classes, where fashion became a more prominent feature than ever before – haute couture was invented in Paris, the centre of La Belle Epoch, and where fashion began to move in yearly cycles.

Paris was a natural magnet for artists like Burgers, attracted by the joire de vivre and the opportunity to mingle with fellow artists, enjoying a Bohemian lifestyle around Montmartre. The influence of the impressionists can be seen in Burgers style, with the loose fluid brush-strokes and the effect of sunlight on the lady’s gown. There were more opportunities for these artists to flourish and Burgers enjoyed considerable success there, he exhibited at the Paris Salon and was decorated with the Legion d’honneur.

His work can be found in the museums in Amsterdam and Sheffield.