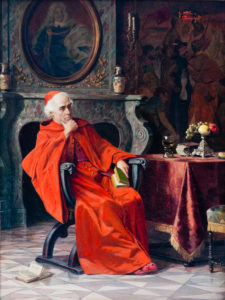 Grete Priechenfried, born Marguerita Priechenfried, the daughter of the artists Alois Priechenfried’ was an early 20th German century painter of historical genre and Cardinals.  Influenced by the masters, Brunery, Croegaert, Landini and Vibert, Priechenfried painted the Catholic clergy, poking fun at their excessive and self-indulged lifestyles.

In his painting ‘Lost in Thought’ Priechenfried rather unusually depicts his Cardinal in a more spiritual pose, having read one book and musing on the text of another, he appears to be giving great thought to their content.  However more typically the scarlet-robed cleric is surrounded by the finer things in life, with a glass of brandy and a silver salver of fruit on a table covered with a velvet, fringed tablecloth.  The thoughtful cleric is seated on a fine Gothic armchair in front of an elegant marble fireplace, two cloisonné vases on the mantle-piece, paintings and tapestries adorn the walls and his red slippers rest on a parquet floor.

Grete Priechenfried’s works are to be found in private collections at home and abroad.