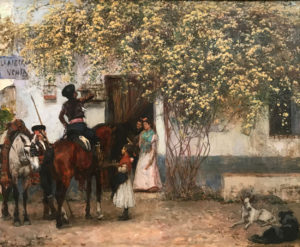 Gonzalo Bilbao was born in Seville, the son of a wealthy lawyer, and the older brother of the sculptor Joaquin Bilbao. Gonzalo began drawing lessons at an early age, with the encouragement of the artist Jose Aranda. However, his father insisted that he study law, along with his art lessons and in 1880, he completed his law degree, but never entered into practice, choosing to continue with his art lessons and devoting himself exclusively to painting. Fortunately, his father recognised his unique talent, and paid his son’s expenses for travelling to France and Italy with Jose Aranda. He remained in Italy for three years, settling in Rome and travelling frequently to Naples and Venice, where he painted both rural and urban scenes. In 1884, Gonzalo returned to Seville, but he continued travelling abroad, visiting and painting the landscapes in Algeria, Morocco, Paris and America.

This fine work Venta La Algeria was painted in Seville in 1899, depicting two horsemen, in typical Andalusian dress, pausing for refreshments at a cantina. It is interesting to note that a cantina, of the same name, can be found today, in Seville  – the buildings are very similar, although the tree is no longer there. It is highly probably that the two men were taking part in a Romeria, an annual pilgrimage, often to the Roman Catholic city of Rome – hence the name. Gonzalo Bilbao has excelled himself in this beautifully composed and executed painting – a lush lemon Spanish broom tree’s branches and blooms span the top of the painting, and the use of impasto, gives both texture and depth to the yellow flowers. The artist has cleverly illuminated the scene, bathing the white washed walls of the building and the figures of the two women and the young girl in dappled sunlight. Finally, Gonzalo has finished and balanced the scene, painting two dogs in the foreground, sheltering from the sun, under the shade of the tree.

Gonzalo Bilbao enjoyed both commercial and academic success during his lifetime. In 1893, he was appointed member of the Academia de Bellas Artes and, in 1901, he became President of the Athenaeum. In 1903, Gonzalo succeeded his mentor and friend, Jose Aranda, as a Professor at the Real Academia de Bellas Artes de Santa Isabel de Hungria. During his later years, he received numerous awards, including the Order of Isabella the Catholic, and the Order of Carlos 111. In 1935, he was elected a member of the Real Academia de San Fernando. Gonzalo Bilbao Martinez died in Madrid in 1938, during the Civil War, while the city was under siege. After the war, his widow, the daughter of a French banker, donated his remaining works to the Museo de Bellas Artes.