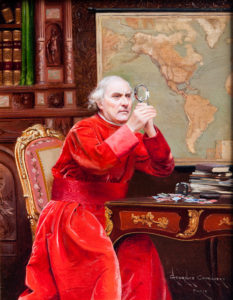 Georges Croegaert is considered one of the four ‘great’ late nineteenth century Cardinal painters, along with Brunery, Landini and Vibert. These painters were at the centre of a genre of painting that poked fun at the excessive and self-indulgent lifestyles of the upper echelons of the Catholic clergy, and enjoyed huge popular appeal amongst audiences of the time.

Born in Antwerp in 1848, Georges Croegaert studied at the city’s prestigious Academy of Arts, and went on to become an accomplished painter. Initially he painted still lifes, later becoming known for his signature salon portraits of young women dressed in sumptuous fabrics, reclining in luxurious rooms.

These portraits of elegant young women were packed with lavish detail, and proved a wonderful grounding for Croegart’s change of focus when he arrived in Paris in 1876. Looking for a niche in which to establish himself and gain commercial success, he began painting portraits of the clergy – cardinals in their luxurious surroundings engaging in indulgent pastimes – and soon gained a strong reputation for his work in this genre.

This painting shows Croegaert’s meticulous eye for detail – the Cardinal in his richly coloured glorious scarlet silken gown, surrounded by grandly embellished furniture. Rather than engaging in biblical study, this prelate is portrayed indulging his passion for philately, certainly unusual subject matter for a painting. Croegaert’s prelates were often to be seen participating in gambling, gluttony and drinking, not to mention the odd fishing trip, but stamp collecting, surely a more genteel pursuit, is somewhat unexpected. It is very uncommon to see philately depicted in this way in nineteenth century painting, and its inclusion marks this painting as a very unusual one – as well as a fine example of George Croegaert’s work.

Georges Croegaert exhibited to great acclaim in his lifetime, in Paris, Brussels and Vienna and his work was popular throughout Europe and the United States. He died in Paris in 1923.