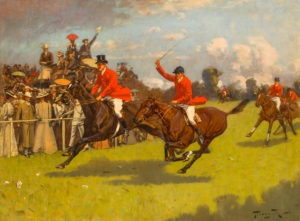 Leeds-born painter George Wright is acknowledged to be one of the foremost sporting painters of his time. Perhaps known best for his hunting and coaching paintings, Wright was involved in various areas of equestrian art, including polo. In fact, he moved to Rugby in 1901 to create a series of polo paintings that, like Wright’s work in general, are still prized by collectors today.

George Wright’s mastery of the equine genre is undisputed. Perhaps because he was a keen huntsman himself, riding with the Old Surrey Hounds, his understanding of the equine form, and in particular the pace and movement of the horse contributed greatly to his accurately observed work.

In contrast, Wright would paint landscapes – either on their own, or as in The Steeplechase – in an impressionistic fashion, which in the case of his equine work would throw the painting’s equine subject matter into sharp relief, highlighting further Wright’s close observation.

The painting The Steeplechase depicts an early point to point race – at this early stage in the sport’s history the race was an amateur one between huntsmen directly after the hunt: the riders would ride from ‘steeple to steeple’ across the countryside.