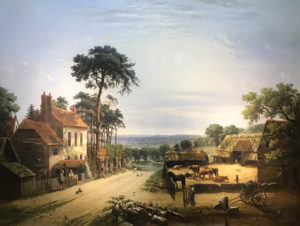 George William Mote was a self-taught artist, who worked as gardener and caretaker to Sir Thomas Phillipps, the great manuscript collector at Middle Hill, near Broadway Worcester.

His early paintings, mostly of the house and gardens at Middle Hill, are painted in an evocative primitive style, which faithfully reproduces the scene. Later he became a fulltime artist and enjoyed success in exhibiting at the Royal Academy 1857- 1873, the British Institution and in the Provinces. As his work evolved, his style became more accomplished, but “he had lost some of the original intensity of his vision” (Maas).

A Farm near Broadwayis a superb example of George William Mote’s painting at its very best. It shows the freshness and naivety of his work, his acute observation, his meticulous attention to detail and although a self-taught artist, his painting of the sky in this picture can be compared to the work of some of the very best nineteenth century masters. The rolling clouds are cleverly illuminated from behind, casting sunlight onto the farm buildings and the vast landscape below, which disappears into the far distance. It is a scene of tranquil quietude, of a time gone by, where the pace of life was a lot slower.

George William Mote enjoyed a successful career, however in 1877, he stopped exhibiting and in later years the quality of his work began to decline.