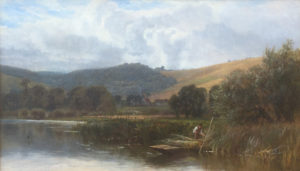 George Vicat Cole was born in Portsmouth in 1833, the son of the artist George Cole. He followed in his father’s footsteps, painting scenes, ‘en plein air’ of our great British countryside, mainly views in Surrey, Sussex and along the banks of the Thames.

Both father and son were known for their manificent skies, with rolling clouds illuminated from behind with a soft sunlight. George Vicat Cole enjoyed considerable success during his lifetime, finding an eager market amongst the emerging Bourgeoisie, who were furnishing their grand city homes with scenes of the countryside they left behind.

The Reed Cutters is a charming example of George Vicat Cole’s work and highlights the traditional art of the reed cutter. Historically this was carried out along the river banks, especially those in Norfolk and Suffolk, as the Norfolk reed was particualrly prized by thatchers for its high quality. The reed cutter in Cole’s painting, is seen at work, dressing the reed, a process in which a small home made rake was dragged through the reed to clear debris, before tying the reeds into bundles. He has loaded the bundles onto his boat, ready to be transported home for ‘knocking up’, whereby the loose bundles were repeatedly knocked on the ground to create a tight bundle.

As well as commercial success, George Vicat Cole exhibited from the age of nineteen at the Bristish Institution in London and the Royal Academy from 1853. He was elected an associate of the RA in 1870 and a full member in 1880. His famous work The Pool of London was bought by the Chantry Fund Trustees in 1888 and is now in the Tate Gallery in London.