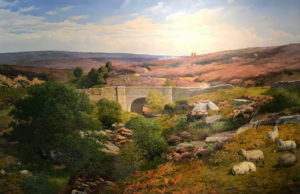 George Vicat Cole was born in Portsmouth in1833, the son of the artist George Cole. He followed in his father’s footsteps, painting scenes, ‘en plein air’ of our great British countryside, mainly views in Surrey, Sussex and along the banks of the Thames.

Burning the Heather – the North Yorkshire Moors is a superb example of George Vicat Cole’s work, it is finely executed and illustrates his habitual choice of wonderful subject matter and composition. The panoramic view in the distance, with the men burning the heather, contasts with the stone bridge and grazing sheep in the foreground, giving the painting a wonderful three dimensional feel. Both father and son were known for their manificent skies, with rolling clouds illuminated from behind with a soft sunlight. George Vicat Cole enjoyed considerable success during his lifetime, finding an eager market amongst the emerging Bourgeoisie, who were furnishing their grand city homes with scenes of the countryside they left behind. In this fine work, George Vicat Cole gives a nod to the influence of the Pre-Raphaelites both in colourings and the execution of the heathers, ferns and bushes, lining the river. Once again, George Vicat Cole has illustrated his consummate skill in conveying to the viewer, the beauty of our great British coutryside and the natural vegetation of its extensive moorlands.

As well as commercial success, George Vicat Cole exhibited from the age of nineteen at the Bristish Institution in London and the Royal Academy from 1853. He was elected an associate of the RA in 1870 and a full member in 1880. His famous work The Pool of London was bought by the Chantry Fund Trustees in 1888 and is now in the Tate Gallery in London.