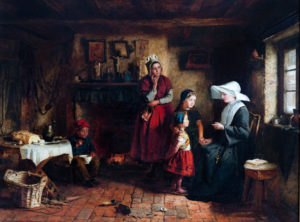 This charming painting by George Hardy (1822-1901) was exhibited at the Royal Academy in 1866. Entitled La Soeur de Charite, it depicts a family being visited by a nun, perhaps to prepare the two little girls for their confirmation. There are other clues to the family’s faith: the crucifix on the mantel piece, and the bread, cup and cloth on the table could be symbolic of Holy Communion.

Hardy’s paintings are often of domestic scenes, particularly with children. The Victorians were fond of paintings that showed young people engaged in activities that were educational or improving, and this was a rich seam that Hardy mined, as did his brother FD Hardy. Both were members of the Cranbrook artists’ Colony in Kent, (which FD Hardy started) and exhibited at the Royal Academy between 1846 and 1892, also at the British Institution.

Compositionally, too, this is a fine example of Hardy’s work – some of his strongest paintings are set indoors – he uses natural light from a door or window to illuminate the room, giving an interesting balance of light and shadow