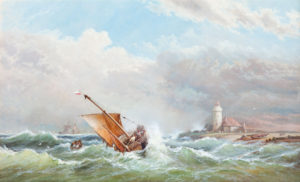 George Gregory was a marine painter, the son of the artist Charles Gregory, whose exhibition of watercolours was held at Northwood House, Cowes in 1954, sponsored by the White family – famous shipbuilders – and opened by First Sea Lord and Chief of Naval Staff of the Fleet, Sir Roderick McGrigor. Living and painting in the Isle of Wight, George inherited his father’s talent and zeal for seascapes. It is said that George Gregory was asked to teach Queen Victoria’s children to paint when they were staying at Osbourne House, but he either declined the honour or gave up the task after a few lessons.

Gregory had a great knowledge and love of the sea and this is reflected in the accuracy and merit of his marine paintings. This fine example of his work shows the ship being tossed by the wind and waves in a storm, struggling to make it to the safety of shore, with another small boat perhaps rowing to their rescue. You can almost feel the spray and see the white crests of the angry waves as they lash against the ship, whilst the tired crew battle against the elements.

George Gregory is known to have made the occasional journey abroad and although quite a prolific artist, he is not known to have exhibited during his lifetime. His main working period seems to date between 1870 and 1910, but he is said to have continued painting up to about 1925.