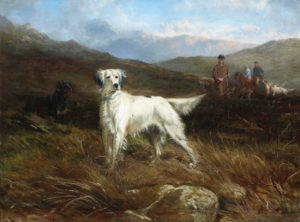 George Earl was the patriarch of a family of sporting artists, which included his brother, Thomas Earl, his daughter Maud Earl and his son from a second marriage, Percy Earl. Thomas is less well known than George, and seems to have specialised in pet portraits rather than pictures of sporting dogs. Maud Earl became one of the best known of all dog painters, emigrating to America, as did her stepbrother, Percy Earl.

George Earl was a keen sportsman, which is reflected in his work and reputation as a dog painter. He was also an early member of The Kennel Club and painted a series of studies of dogs’ heads, for members of the club, entitled Champion Dogs of England – the works were illustrated in a book of the same name. One of his most well known of George Earl’s sporting paintings is The Field Trial Meet, depicting a mythical field trial in Bala, North Wales, in which almost all the important field trial personalities of the day were depicted with their dogs,

Two other important pictures Going North and Coming South, now owned by the National Railway Museum in York, are bustling narrative works depicting railway station life during the summer grouse shooting season. The groups of upper class passengers and their servants are pictured with all their hunting and sporting equipment, along with their dogs and grouse.

Roll and Kent – The Champion Setters was originally commissioned by Mr Rogerson of Liverpool and is a romantic scene, with Mr Staveley-Parker and his shooting party in the background, but the stars of the show are the setters Roll and Kent. Both dogs, Roll, the English Setter and Kent the Gordon Setter are recorded in John Henry Walsh’s book The Dogs of the British Isles. The Setter family is comprised of English, Irish and Gordon Setters, and although their exact origins are uncertain, they are undoubtedly derived from some parent stock. Much of the credit for the development of the English Setter as a distinct breed goes to Edward Laverack and after him R L Purcell Llewellin. Early sporting writers describe them as ‘setting’ or ‘crouching’ Spaniels, in contrast to the ‘finding’ or ‘springing’ Spaniels’ which flushed game without pointing it. The scene set probably in Scotland or the Scottish borders, shows the two dogs majestically standing on the bracken-clad moors with Mr Staveley-Parker, gun in hand, followed by his hunting party. Such a painting would not have been possible without the precedent of Landseer, who introduced a sentimental note into his sporting paintings.

George Earl exhibited regularly in London at the Royal Academy, the British Institution and Suffolk Street between 1857 and 1883 and there are engravings of many of his works.