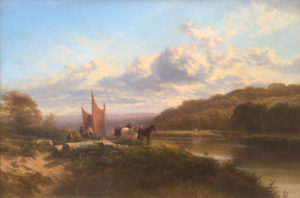 Rustic genre and animals played an important role in his paintings, and his habitual choice of wonderful subject matter and composition can be seen in this finely executed work On the Wye, Goodrich. George Cole is known for his magnificent skies, with rolling clouds illuminated with a soft light. The sky in this fine work, illustrates his consumate skill – the fluffy clouds have a golden glow, and the sunlight send shafts of light across the still river, lighting the paths. A group of men toil with the heavy logs on the riverbank, while the team of horses patiently wait for the wooden cart to be loaded, ready to be pulled to its final destination. A herd of cattle graze under the trees on the opposite bank – it is a tranquil scene of a time long gone by.

As well as commercial success, George Cole exhibited sixteen works at the Royal Academy and his work formed the mainstay of the Society of British Artists at Suffolk Street, where he exhibited 209 paintings from 1838 until his death in1883. He was elected a member in 1850, became auditor in 1856 and vice-president in 1867. He was also awarded a medal for a harvesting scene in 1864 by the Society for the Encouragement of the Fine Arts.