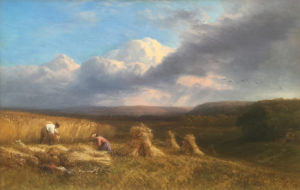 Rustic genre and animals played an important role in his paintings, and his habitual choice of wonderful subject matter and composition can be seen in this finely executed work In the Cornfield. It is a beautifully painted scene, depicting a man and woman, busy at work harvesting the crop. The man, in his shirt sleeves cuts the corn with a large scythe, while the woman with a pretty hat, shading her from the sun, ties the corn into neat sheaves, arranging them in the poppy strewn cornfield. A basket with the couples’ picnic and a keg of ale or cider lies ready for a well earned lunch – their modest thatched-roofed farm cottage can be seen nestling by the trees. A nostalgic scene of domestic quietude, of a time gone by.

George Cole is known for his magnificent skies, with rolling clouds illuminated from behind with a soft sunlight. The sky of In the Cornfield, is no exception, with the clouds tinged by a rosy glow and in the distance a flock of birds fly across the dark clouds which threaten an impending storm.

As well as commercial success, George Cole exhibited sixteen works at the Royal Academy and his work formed the mainstay of the Society of British Artists at Suffolk Street, where he exhibited 209 paintings from 1838 until his death in1883. He was elected a member in 1850, became auditor in 1856 and vice-president in 1867. He was also awarded a medal for a harvesting scene in 1864 by the Societyfor the Encouragement of the Fine Arts.