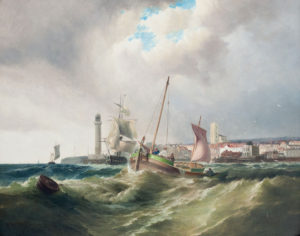 George Chambers was born in Whitby, his father was a sailor and his mother let lodgings.  He left school at the age of eight to go to work and at the age of ten he shipped aboard an uncle’s Humber keel called the Experiment. When he was twelve his father got his firm to take him as an apprentice in the brig Equity, under Captain Storr. George Chambers always had a strong urge to paint and when he was released from his indenture he set up as a house and ship painter. Following his mother’s death in 1820, he went to London, where he found a wealthy patron and under his guidance, commissions began to come in.  He visited Holland twice during his life, but the career of the most promising marine painters of his generation was brought to an end with his early death in 1840 from tuberculosis.

He exhibited in London at the British Institution from 1827 to 1840, the Royal Academy and at the Old Watercolour Society. In 1836 he was elected a member of the Royal Society of Painters in Watercolours. In 1830 King William 1V commissioned his to paint four pictures, which are still in the Royal collection.

Besides the quality and nautical expertise that made the work of George Chambers so admirable, there is the important matter of his use of perspective. He used viewer’s perspective, which gave his pictures an immediacy and impact.