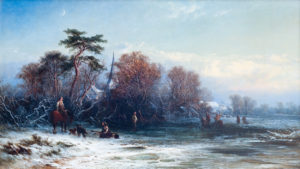 George Augustus Williams was born in 1814, the son of Edward Williams and a member of the highly esteemed ‘Williams Family of Painters’. He was a prolific and versatile artist, painting Thames views, moonlight scenes, coastal subjects and landscapes in Kent, Wales and throughout the British Isles.

Williams exhibited mainly at Suffolk Street (140 works); also at the Royal Academy 1841-1885 and the British Institution.  His work contains distinguishing characteristics, which give it a definite identity.  Of all of the Williams, he was the only one to paint the frosty winter scene.  His finest effects were obtained when he combined the frosty appearance with an evening light.  A yellow haze of sky, withered grass in the foreground and figures skilfully darkened against a fading light, are very characteristic of this effect, taking something from a cold Dutch landscape, but bringing to the atmosphere a more tranquil, more homely air.

His works are represented in the museums of Montreal and Warrington.