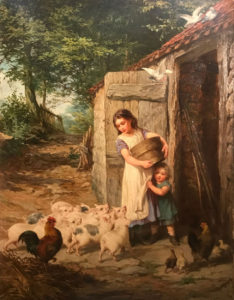 ‘A Circle of Friends’

George Augustus Holmes was a painter of genre scenes who exhibited at the Royal Academy between 1852 and 1909. He also exhibited at the British Institution, the Grosvenor Gallery and the Paris Salon between 1906 and 1911; however most of his works were exhibited at Suffolk Street where he exhibited no less than 110 pieces.

The subjects of his paintings are usually scenes of everyday life, from farm labourers in the fields, to cottage scenes, all beautifully observed. Very occasionally he turned his hand to important pieces, which are ingeniously composed, highly finished and especially natural.

A Circle of Friends is a superb example of the artist’s work, and the star of the show is the hungry circle of piglets, squealing for their food. The younger girl is a little unsure and cowers behind the apron of the elder girl, holding a barrel of grain. A majestic cockerel observes from behind the piglets, eagerly awaiting his turn and doves hover on the roof of the barn. The scene is an idyllic portrayal of country life, with sunlight shining through the lush green trees, dappling the paths and illuminating the hungry litter.

George Augustus Homes enjoyed tremendous popularity and success in his lifetime. His nostalgic works were much loved by his clients and are today are collected both at home and abroad.