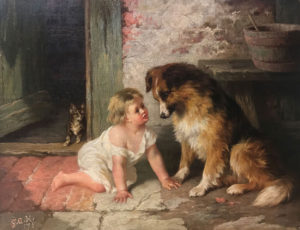 George Augustus Holmes was a painter of genre scenes who exhibited at the Royal Academy between 1852 and 1909. He also exhibited at the British Institution, the Grosvenor Gallery and the Paris Salon between 1906 and 1911; however most of his works were exhibited at Suffolk Street where he exhibited no less than 110 pieces.

The subjects of his paintings are usually scenes of everyday life, from farm labourers in the fields, to cottage scenes, all beautifully observed. Very occasionally he turned his hand to important pieces, which are ingeniously composed, highly finished and entirely natural.

Man’s Best Friend is a charming study of a young child, who having crawled out of the house, comes nose to nose with the seated dog, who has tenderly lowered his head, to look gently into the child’s eyes. The encounter is watched over by a tabby farm cat, sitting on the threshold of the open door. George Augustus Homes enjoyed tremendous popularity and success in his lifetime. His nostalgic works were much loved by his clients and are today are collected both at home and abroad.