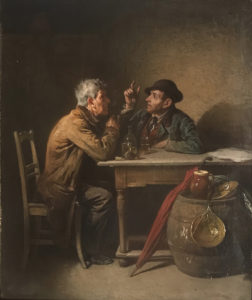 Friederich Friedlander, born in Kohnljanowitz, Austria in 1824 was a painter of genre. He was one of the many artist of the period, who specialised in painting old men, often in a rustic inn, smoking, drinking, gambling and generally enjoying life. It was a celebration of man in the twilight of his life and he had the ability to bring out the character of his subjects.

The Deal, typical of Friederich Friedlanders’s work, is set in a sparse country tavern, with two men discussing a deal over a drink. The man in the hat is holding two fingers apart in the air, to indicate an amount, while his grey haired companion, quietly puffing on his pipe, his tobacco pouch and matches on the table, thinks on the offer. Both men are enjoying a glass of ale together, a folded umbrella leans against a barrel, and a set brass weighing scales, possibly connected to the impending deal, dangle down its side. As in all his works, Friederich Friedlander’s The Deal is of outstanding quality, meticulous detail and flawlessly executed. His keen observation and precision on a small scale is superb.

Friederich Friedlander was a pupil of Waldmuller at the Vienna Academy, before travelling abroad, visiting Paris and Italy. He later returned to Vienna, where he remained and in 1889 he was elected a member of the Vienna Academy