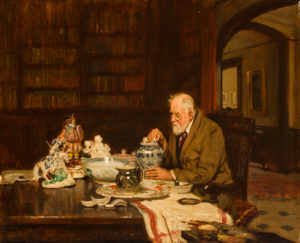 Beverley in the East Riding of Yorkshire, with its links to the mercantile hub of Hull has always been a prosperous and bustling market town, famous for its thirteenth century Minster.

In recent years there has been a growing awareness of the work of Beverley artist Frederick Elwell (1870-1958), the son of a local cabinet maker who made his way in the art world during the latter part of the nineteenth century. An alumni of Lincoln School of Art and later the Antwerp Academy under Van Havemaert, where he won the Silver Medal for Painting in 1891, Elwell painted in the realist style and enjoyed a strong reputation in his own lifetime.

As a young artist, Elwell spent time in both Paris (studying at the Academie Julian under William-Adolphe Bouguereau) and in London, but following poor health and equally poor finances, returned to Beverley, to the family fold.

His home town continued to exert a strong influence on the artist for the rest of his life. It was here that he met and eventually married the widowed artist Mary Dawson Holmes. Holmes was an artist in her own right and like Elwell, she exhibited annually at The Royal Academy. Both were in their forties by the time they married.

With such a broad education behind him, Elwell clearly made the conscious decision to paint in a realist style, influenced by the Old Masters and the training he received under Van Havemaert. Although also influenced by the French Impressionist movement, his subject matter was to take a very vernacular, more domestic direction, particularly after his marriage to Mary. It may be pure conjecture, but it has been suggested that his wife’s financial security allowed him to be braver in his choice of subject for paintings such as his 1919 work The ‘Beverley Arms’ Kitchen. Whatever the reason, the artist’s work developed a solid maturity from this time. He took a studio in Holland Park in London, and was elected to full Royal Academy membership in 1938.

His New Purchase is a portrait of Elwell’s father James, sitting at a table in Fred and Mary’s book-filled study, with his acquisition of an auction lot of ceramics. James Elwell, a ceramic enthusiast, is seen immersed in repairing a vase. The work is considered an important find, particularly because it is such a striking example of Elwell’s choice of subject matter. The artist not only combined still life with portraiture as illustrated in His New Purchase, but also combined portraiture with interiors. It’s all here, and what’s more, the painting displays just as masterfully Elwell’s depiction of light and shadow, the meticulous, lifelike detail of his father’s face, the brave brushstrokes

Much consideration has been given recently to Elwell’s work and while the artist has always been highly regarded and collected in and around his native county, his profile and reputation have increased greatly in the last few years, with his work highly sought after both at home and abroad.