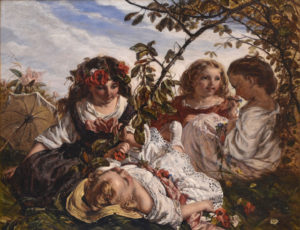 Frederick Charles Underhill was born in Birmingham in 1833, the brother of the artist William Underhill. Frederick was a painter of genre, coastal scenes and biblical subjects.

The May Queen is a superb example of Underhill’s work, exhibited at the Royal Academy in 1865, and inspired by Tennyson’s poem of the same name.  May Day was a traditional village holiday in the nineteenth century and was wholly associated with children. The girls of the village would elect a May Queen who wore white to signify purity, and after being crowed with a floral headdress, the children would follow her with garlands of flowers, in procession through the village.

In this wonderful painting, the May Queen, clothed in white is sitting under the shade of a leafy bower, with two other girls and a small child. The focal point of the painting and illuminated by the warm Spring sunshine, is the pretty, rosy-cheeked girl, who is wearing the May Queen’s floral headdress. Frederick William Underhill paints with a fluid brushstroke, using bold colours, contrasting them against the snowy white of the infant’s dress – it’s an idyllic scene of childhood innocence. The nineteenth century artists loved to paint scenes contrasting the country with the town, portraying the rural paradise of tradition, stability and innocence, all those things not to be found in the ugly, sprawling new cities.

Frederick Charles Underhill enjoyed both artistic and commercial success during his lifetime, exhibiting 1851 – 1875 and at the Royal academy in London 1852 – 1867.