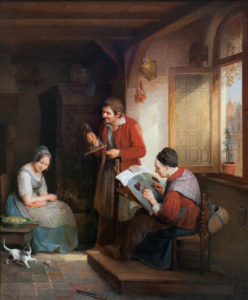 Franz Josef Luckx was a painter of scenes in the ‘Dutch Historical Genre’ style. He took pains to include accurate historical detail, and his subject matter was mostly domestic, looking to seventeenth century Dutch and Flemish old master pictures for inspiration.

In The Lacemaker, the solid industriousness of a family involved in fine lace making is portrayed. While the old woman makes lace (in the way it is still made today in the Netherlands), her son winds the bobbin while his wife sits beside a spinning wheel. Both the son and his wife are distracted by a playful kitten batting a spool of thread. Through the window we can see the buildings of a Dutch or Flemish city – perhaps Amsterdam or Bruges.

Franz Josef Luckx was born in Malines in 1802, where he later became a Professor of Art. He died in Brussels in 1849. His work, La Tricoteuse, can be seen in Munich’s Pinacoteque.