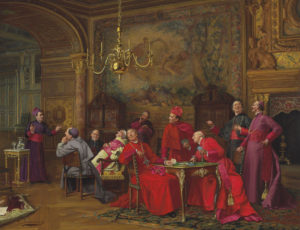 Francois Brunery was one of a handful of fin de siecle academic artists specialising in ecclesiastical, (also termed anti-clerical or Cardinal) painting.

A leader in his field, Francois Brunery depicted members of the clergy – lavishly dressed and in opulent settings – engaging in a variety of Cardinal Sins: sloth, greed, pride, gluttony. His suggestively humorous painting, ‘An Eminent Gathering’ is the finest example of the genre, but also of Brunery’s exquisite painting skills.

The cardinals are portrayed gambling and drinking, and one is clearly so involved in partaking of his snuff box that he fails to pay attention to the joke which is amusing his well-fed friends.

Ultimately the joke is at the expense of the cardinals. Francois Brunery gently exposes them as being as susceptible to everyday temptations as the common man.

Although born in Turin, Francois Brunery lived and worked in Paris, studying under Gerome and Bonnat and thriving on the Parisian art scene. Paris suited him – his work fetched large sums of money – and he enjoyed a successful career, including receiving an ‘Honorable Mention’ at the Paris Salon in 1903.