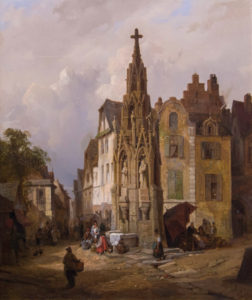 Francois August Bossuet was a highly regarded Belgian painter of architecture, and he was also a fine draughtsman. Born in Ypres in 1880, he studied at the Brussels Academy under the artist Herryns, and later he was a professor in Antwerp from 1855 until 1876.

Francois Bossuet was best known for his depictions of the landscapes, cities and monuments of  Spain and Italy, with an emphasis on historic places, occasionally with genre scenes of everyday life. He travelled extensively, visiting, Portugal, Italy, Spain, Morocco, Germany and Holland. Francois Bossuet’s romantic sites and town views were much in favour at the time, and now constitute excellent topographical documents, especially of the cities damaged during the second world war. Bossuet’s works are abundaant and are remarkable for their precision, accuracy of perspective and the striking effect of light. As with this work The Market Place – depicting  a scene of everyday life, with the local women washing at the fountain in the market place, many of Francois Bossuet’s works tended to be quite small in size.