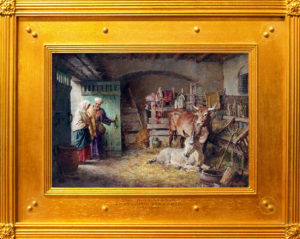 The son of the artist Eduardo Matania, Fortunino Matania studied in his father’s studio in Naples. A child prodigy, exhibiting a painting of Naples at the age of eleven, at the Royal Academy of Naples, he is recorded as saying “I can’t remember when I first held a brush’.

The Holy Stable, influenced by the Pre-Raphaelite movement, is an example of the diversity of this fine artist. The choice of subject, with a more contemporary feel, painted using the rich scarlet, emerald green and deep purple tones for the clothes of Mary and the innkeeper, is typical of the genre. The kindly innkeeper is showing Mary the stable, while the ox and donkey look on. The manger, filled with hay can be seen behind the animals, illuminated by the light from the open door. Matania went to enormous lengths to ensure that all aspects of his paintings were absolutely historically correct, and this meticulous approach to detail is evidenced in this little ‘gem’.

Fortunino Matania began his career by assisting his father with his illustrations intended for the periodical L’Illustrazione Italiana and his proficiency and talent was soon reecognised in wider circles. From 1895-1902 Matania was producing his own illustrations for the magazine, and before moving to Britain, he worked as a travelling artist for magazines in Italy, Germany, France and England. In 1902 he was awarded the great honour in becoming the official artist for the Coronation of Edward V11 for The Graphic Magazine. Fortunino Matania continued his association with the royal family, being invited as a guest of George V, when he and his queen were installed as Emperor and Queen Empress of India. Fortunino Matania’s original watercolour work Cubiculum formed part of the collection of Queen Mary.

In 1914 Matania became a war artist and he was in the trenches many times, drawing from life to ensure that his paintings were realistic renditions. He is quoted as saying after the experience “After it was over I realised that drawings of innocuous functions would not appeal, photography had made great strides so I turned to something else, the reconstruction of historical events”.

The artistic output of this remarkable artist seems truly endless. In his pursuit of ideals Matania stood alone amongst his contemporaries, he employed a resourcefulness rarely matched and always remained true to his notion of beauty and realism. He exhibited at the Royal Academy 1908 to 1921 and at the Royal Institute of Painters in Watercolours, becoming a member of the latter in 1917.