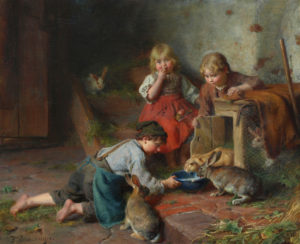 Felix Schlesinger was a genre painter of some stature. He was, and remains to this day, acclaimed for his rustic scenes, featuring ruddy faced barefoot working class children engaged in wholesome activities: familial scenes or the feeding and rearing of animals,

After training at the Dusseldorf Academy, the Hamburg born artist worked in Paris before settling in Munich, where he became a member of the renowned Munich school of artists. Munich was an important center of painting and visual art in the period between 1850 and 1914 – Schlesinger’s work shows many of the characteristics of the Munich school: a naturalistic style and a dark chiaroscuro. Typical subjects are landscape, portraits, genre, still-life and history painting. In Munich he enjoyed a comfortable acclaim due to the demand there amongst the affluent bourgeoisie for genre painting of this kind, which romanticised and often idealised the lives of the working classes.

Schlesinger often included rabbits in his paintings. Of course, they are a good food source for the working classes, or could be reared and sold on for some extra household income. The rabbit is also a symbol for abundance and fertility, concepts echoed in the pink cheeked vitality of the children, and it could be that Schlesinger was making a nod to art history – to Albrecht Durer’s watercolour of 1502, Young Hare, and to the Dutch and Flemish painters of the seventeenth century who often included hare or rabbit in their paintings to showcase their painting technique and ability.