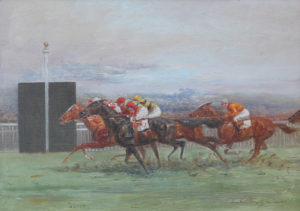 Eugene Pechaubes was born in Pantin, a commune in the northeastern suburbs of Paris in June 1890. He was a renowned 20thcentury French artist, well known as a painter of sporting scenes, equestrian and military subjects.

This fine pair of racing scenes, unusually set on the famous British racecourses of Ascot and Newmarket, illustrate Eugene Pechaubes’ consummate skill in capturing the movement of the horses. He studied the body, gait and horses’ attitudes, as well as their inherent elegance. The crowds at the finishing posts of both paintings almost blend with the skies, giving the impression of the speed of the racehorses, as the leading jockeys try to get the one last spurt of speed from of their mounts, to secure a win. Ascot and Newmarket are a compositionally balanced pair of paintings, with the horses in each painting symmetrically racing inwards.

Eugene Pechaubes early works mainly consisted of military scenes, especially Napoleonic scenes from the second empire, while his later works were almost exclusively racing scenes and equine portraits of famous racehorses. The art historians Gerald Schurr and Pierre Cabanne are quoted as commenting that Pechaubes’ work as a portraitist of horses, earned him the title of ‘Little Master’.