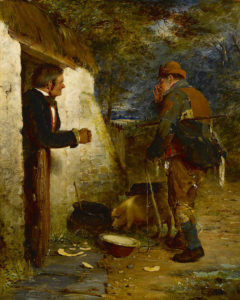 Erskine Nicol was born in Leith, Scotland, and despite early strong resistance from his parents, he pursued a very successful career as an artist.  He took all opportunities, first taking an apprenticeship under a decorative house painter, then aged twelve becoming a student at the Trustees’ Academy in Edinburgh, under William Allen and Thomas Duncan.

In 1846, Erskine Nicol, following a spell back in Leith as a drawing instructor, went to Ireland, where he spent four years as a teacher and portrait painter. It was there that he found his metier, painting humorous character studies and genre scenes of the Irish working class. His scenes with mirthful country bumpkins, won him a high degree of popularity, with his work being reproduced in engravings. However, painting at the height of the Irish Famine, saw a more serious side to Erskine Nicol, with him using his work to portray the injustices inflicted upon the Irish population during the nineteenth century.

The delightful work, quoting its’ full title ‘Morrow Paddy, where are you goin wid the pigs? Whisht ye divil, they’ll hear you, its to Cork I’m goin, but its Kinsale they think I’m takin thim to’ illustrates  Erskine Nicol’s dry sense of humour at his very best. Passing his neighbour, on the way to market at Cork, the farmer is anxious not to let his two pigs know their impending fate, probably having reared them from birth he wants to let them enjoy their last few hours by kidding them that they are going to the country fair at Kinsale. His sensitivty to his pigs, highlights the farmer’s simple nature and warm side.

Erskine Nicol returned to his native Scotland in 1851, where he exhibited a half dozen such works at the Royal Scottish Academy, followed by a stream of others.  He became a member of the RSA in 1859, before moving London in 1862, exhibiting at the Royal Academy, where he was elected an associate in 1868.Nicol also enjoyed success in France, exhibiting in several exhibitions there and winning a second class medal at the Universal Exhibition in 1867. During this period, he never lost his love of Ireland and the Irish people, making yearly trips across the Irish sea. He finally retired from the Royal Academy in 1885 due to ill health, returning to Scotland, before settling in Feltham in Middlesex, where he died in 1904.

His two sons – John Watson Nicol and Erskine E Nicol, both became successful artists in their own right.