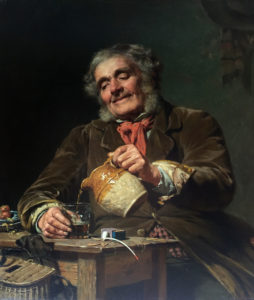 The son of the genre painter Thomas Edward Roberts, Edwin Roberts was a London painter of genre. A prolific painter, Edwin Roberts exhibited forty six works at Suffolk Street 1862-1886 and he also exhibited at the Royal Academy in 1882 and 1884.

His work A Welcome Drink illustrates Edwin Robert’s mastery in portraying the character of his subject. Here the man, returning from a fishing trip, gently pours himself a glass of ale from the earthen ware jug. His hat and scarf hang from a hook on the wall, his fishing basket and rod rest against the table, his clay pipe and matches ready for him to light and enjoy with his drink. The viewer can see the look of anticipation on his face, the care he takes in pouring the ale for a welcome drink. He has a ruddy complexion, long grey sideburns, hands used to manual work, however he takes pride in his appearance, he is smartly dressed, a red kerchief tied round his neck, but his coat button strains round his bulging middle, revealing a chequered waistcoat – it is obvious that he is a man who enjoys a drink or two, a man who is content with life! It is a moment in time illuminated from an unknown light source and Edwin Roberts has produced a study of contented quietude,