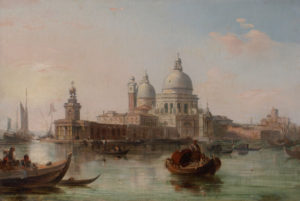 Edward Pritchett was a painter of Venetian scenes. Working in both oils and watercolours, he is considered to be one of the finest painters of Venice in the Victorian era. His artistic imagination was inspired by the atmosphere and bustle of the daily life of this most beautiful city. Edward Pritchett painted in a lively, fresh, and almost impressionistic manner, capturing the transient light effects and vivacity of the Venetian panorama.

In Edward Pritchett’s painting The Grand Canal, Venice, he depicts the mouth of the Grand Canal with the Dogana before the magnificent domes of Santa Maria della Salute, bathed in sunlight. In the nineteenth century Venice was the centre of trade and commerce, a city alive with activity and the exchange of goods. The Dogana or Customs House, situated at the entrance to the Grand Canal, was where the arriving cargo vessels from the East and West, would be inspected by the customs officials. The gilded globe, with a statue of the Goddess Fortuna, holding her golden sail to the wind, acts as a weathervane and is supported by a pair of bronze crouching Atlases – this sits majestically on the square tower of the building, looking down on all who enter. The beautiful church of Santa Maria della Salute, is one of the most famous and celebrated churches in Venice. Built after the devastating plague of 1629, and dedicated to the Virgin Mary, Santa Maria, this wonderful building is a supreme masterpiece of Venetian Baroque. It’s design and architecture reflects its’ dedication to the Virgin Mary. Santa Maria was an important addition to the Venetian skyline, and soon became emblematic of the city inspiring artists like Edward Pritchett -Canaletto, J M W Turner, Francisco Guardi and John Singer Sargeant..

Edward Pritchett, enjoyed considerable acclaim during his lifetime, exhibiting in London at the Royal Academy from 1828-1868, the British Institution, the Society of British Artists and the Suffolk Street Galleries. His technique is described in Julian Halsby’s The Artist’s Vision; A Guide to American and British Painters, as ‘a lively and impressionistic handling – few painters have better captured the wonderful sunlight and vivacity of this carnival city’.

His works are represented in the Victoria and Albert Museum, the Manchester City Gallery and the National Gallery in Dublin, as well as many private collections both at home and abroad.