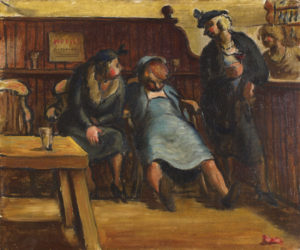 A highly sought after illustrator of his time, Edward Ardizzone successfully combined a fine art career with a commercial one. Alongside a very prolific career as an illustrator, working with all the major publishing houses, Ardizzone also spent time working as a war artist. His illustrative style combines simplicity and detail in a way that seems quintessentially English.

Ardizzone was a great observer of the world around him, particularly people, and he would make paintings of people and places around London, where he lived. His oil painting ‘the Drunks’, is characteristically humorous, depicting a trio of pink cheeked ladies enjoying the conviviality of their local pub, one of them slumped in unladylike fashion. Oils by Ardizzone such as this are rare and highly prized – most were kept within the family, and it is only latterly that a small number have been released onto the market.

Ardizzone mainly illustrated childrens books, many of which, such as Tim All Alone (Oxford, 1956) he also wrote. He won the inaugural Kate Greenaway Prize for Tim All Alone, and went on to achieve a Commended runner up for the 1959 Greenaway Medal for his illustrations of Titus in Trouble for James Reeves.

Ardizzone was appointed Official War Artist in 1940 and travelled to France as a War Correspondent to record the British Expeditionary Force. Between 1942 and 45, he travelled to North Africa, Sicily and Italy, was at the Normandy Landings and also spent time in Germany. An extensive collection of his war pictures along with his wartime diaries can be found in the Imperial War Museum. National collections of paintings, manuscripts and lithographs can be seen at the Tate, London, and the Ashmolean Museum, Oxford.

In 1953 Ardizzone was commissioned to create a watercolour of the Queen’s Coronation. In 1954 he was commissioned by the Press Gallery to create a portrait of Sir Windston Churchill for presentation to him on his retiremet. The artist was elected to the Royal Academy of Arts in 1970, and appointed CBE in 1971. He died in 1979.