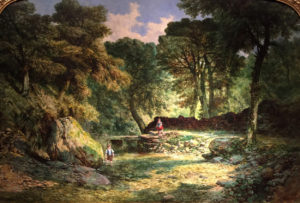 Edmund John Niemann was born in Islington in 1813, the son of John Diedrich Niemann, a native of Minden, Westphalia. He followed his father into banking and as a young man Edmund was employed as a clerk at Lloyd’s in the City of London.  In 1839, having decided to devote himself to art, Niemann moved to High Wycombe, where he enjoyed a highly successful career as a landscape artist, working mostly in oils.

West Clifton is a beautifully executed landscape, showing Edmund Niemann’s use of natural colours and visual realism, along with his consummate skill in the illuminating effects of light reflection on the landscape. The subject of two children fishing is a pastime enjoyed by children through the ages – here the boy, trousers rolled up wades through the crystal clear water, rod and jar in his hands, watched from the bank by the young girl, who expectantly dangles her rod in the stream. The scene is one of quiet tranquillity, with the artist, using varied shades of green and natural sunlight illuminating the water, to depict summer in all its glory.

Although Edmund Niemann especially enjoyed painting the scenery of the Thames and of the River Swale, near Richmond in Yorkshire, he also painted many other areas of the British Isles. Between 1844 and 1872, he exhibited paintings at a wide range of prestigious galleries, including the Royal Academy, the British Institution, the Society of British Artists in Suffolk Street, the Royal Scottish Academy, the Royal Institute, the Paris Salon, the Liverpool Academy of Arts and the Manchester Academy of Fine Arts. However, dissatisfied with the exclusiveness showed by the management of several leading art societies, he and a number of other artists founded the ‘Free Exhibition’ in the Chinese Gallery at Hyde Park Corner. This exhibition opened in 1848 with 500 works of art including sculpture. In 1850 this became the Portland Gallery, Regent Street and Edmund Niemann was chosen as one of the trustees and honorary secretary. The society later became known as The National Institution. The society was short lived with 1861 seeing the last of their exhibitions.

Following many years of ill health, Edmund Niemann died suddenly at Brixton Hill, Surrey in 1876, leaving a legacy of fine paintings, which can be found in the museums of Blackburn, Glasgow, Liverpool, Manchester, Sheffield, the Victoria and Albert in London and nine of his works in the Wolverhampton Art Gallery.