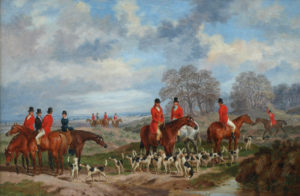 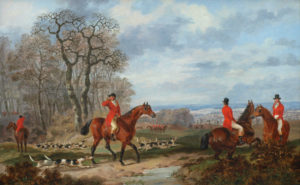 after his own designs and those of his contemporaries.

Dean Wolstenholme Jnr studied painting and drawing under his father, before continuing his studies at the Royal Academy Schools in London. Much of his early work was the reproduction of his father’s paintings and the first set, four plates ‘Coursing’ appeared in 1817. He enjoyed considerable success during his lifetime, exhibiting at the Royal Academy from 1818. 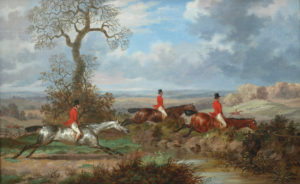 Wolstenholme Jnr was a great pigeon fancier and he painted several pigeon paintings and The Pigeon Fanciers of England, Scotland and Ireland presented him with a Testimonial of their achievement for his skill in portraying “those birds which it was the aim of the ‘Fancy’ to produce”. 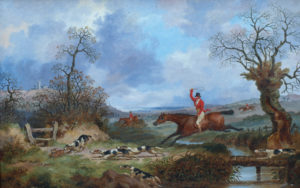 This set of four hunting scenes, tracing the hunt from The Meet to The Kill are a superb example of the artist’s work. Painted on panels to produce the fine and detailed scenes, the huntsmen in their ‘hunting pink’ and top hats, are set against a backdrop of the English countryside. Wolstenholme Jnr has brought movement and excitement into his scenes, with the stars of the show, the huntsmen and their horses racing after the pack. The four paintings provide both a historical and pictorial record of a nineteenth hunt – the epitome of rural England.