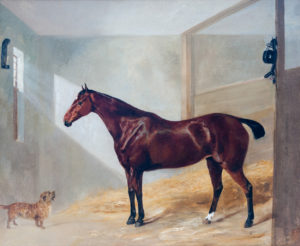 One of Yorkshire’s best known equine and sporting artists, David Dalby created very accurate and highly finished paintings that enjoyed great popularity throughout the nineteenth century. He was considered to be in his prime in around the 1820s, although his work still fetched considerable sums well into the 1890s.

He lived at York, moving briefly to Leeds it is said because he offended the local sherrif with a caricature. Dalby often signed himself ‘Dalby York’ and his paintings are to be found throughout Yorkshire in both private and public collections including York Art Gallery and Scarborough Art Gallery.

In Carriage Horse and Dog in a Stable, Dalby depicts a glossy well kept animal  – clearly belonging to a wealthy family and kept in a pristinely cared for stable. Dalby was popular with his Yorkshire patrons, for whom he painted racehorses, equestrian portraits and hunting scenes. He sometimes painted in the style of John Ferneley Snr, and Ferneley was certainly a great influence on Dalby. In 1824 he produced a set of three paintings depicting ‘Lord Harewood’s Hunt’. His racehorse paintings included the St Leger winner ‘St Patrick’ and he also painted the father and son ‘Blacklock’ and ‘Velocipede’: the latter was winner of the St Leger in 1828.

Dalby died in 1836 and was buried at St Michael le Belfry Church in York.