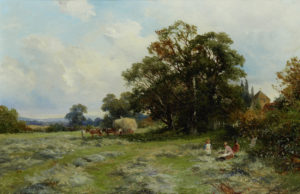 David Bates was born in Cambridgeshire, but spent his early life in Worcestershire, beginning his career as an apprentice at the Royal Worcester Porcelain Works – where he came to specialise in painting flowers.  He left the employment there in 1880, and after visiting North Africa he returned to become a full-time professional painter.

David Bates was a ‘plein air’ artist, painting rural scenes in the Midlands, Scotland and Wales and abroad in Switzerland and Eygpt. His work shows the influence of his fellow artists, Benjamin William Leader, Joseph Thors and Samuel Henry Baker.

‘In the Valley of the Avon’ is an idyllic tableau of  countrylife in the late nineteenth century, a mother with her children enjoying a picnic, and one child picking flowers in the foreground – farm workers  busyly gathering the hay onto a horse drawn cart – the rolling fields of the Avon countryside in the distance – a scene of contentment in rural Engalnd, with a small English church nestling behind the trees.

David Bates is associated in style with the Birmingham School of artists and enjoyed success during his lifetime, exhibiting at the Royal Academy, Grosvenor Gallery, Royal Society of British Artists and New Watercolour Society in London and at the Birmingham Society of Artists. Today his works are currently on display in Liverpool Museum, Worcester City Museum and several other art galleries.