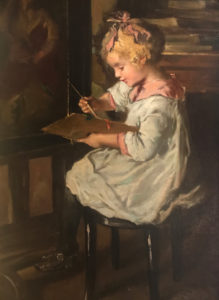 Ethel Walker was born in 1861 in Edinburgh, the younger child of Yorkshireman, Arthur Walker. The family later moved to London and Ethel Walker was educated at Brondesbury, where she was taught drawing by the artist Hector Caffierti.

Following secondary school, Ethel Walker attended the Ridley School of Art. In 1880 she met fellow artist Clara Christian and the two began living, working and studying together. It was during this period that Ethel Walker developed her strong interest in art. After studying at the Putney School of Art, where her teacher was the popular artist, Frederick Brown, she followed her mentor to the Slade School of Art for further studies. While at the Slade, she took evening classes with Walter Sickert. In 1912 and 1916 she would return to the Slade School, to study fresco and tempera painting, and again in 1921 to study sculpture with James Havard Thomas.

The Young Master is a charming study of a young girl, seated infront of an ‘old master’ painting on an easel. Palette in hand she looks set to make her mark on the painting – she has already added brush strokes of red and green and is poised ready to make further ‘additions’. Ethel Walker uses a fluid brush stroke and a subtle range of browns in the background, to highlight the focal point of the painting – little girl, seated in a white smock which covers her pink dress. A subdued light from an unknown light source, gently illumionates the child’s pretty face and her golden curls, which are tied with a matching pink ribbon. Ethel Walker has captured a moment in time and tenderly painted a scene of childhood innocence, as the girl concentrates on her palette, unaware of the impending damaged she is about to cause!

Ethel Walker was somewhat of a maverick of the time and in1900, she was the first woman to be elected a member of the New English Art Club. Further success followed, with exhibitions at the Gatehouse Gallery in Glasgow, and the Royal Academy. She was elected an associate of the Royal Academy in 1940 and in 1943, she became a Dame of the British Empire