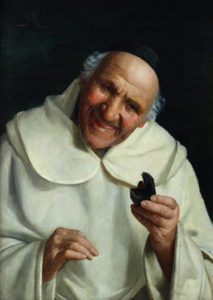 Born in Florence, Claudio Rinaldi was one of the 19th century artists specialising in the popular subdivision of ecclesiastical genre, concerning itself with the monastery behind closed doors.

Claudio Rinaldi’s monk in A Pinch of Snuff, is licking his lips with glee, a twinkle in his eye as he partakes in the fashionable choice of the day, snuff taking – considered by the aristocracy and in court to be more refined than tobacco. His use of light and shade in this fine work, is particularly effective to illuminate the face of his mischievous friar. Clad in the white robes of the Benedictine order, he is holding an open snuffbox, and a pinch of snuff between his right forefinger and thumb, poised for use! Claudio Rinaldi’s technical virtuosity showcases his considerable skill in creating a convincing light- hearted parody, exposing the way of life of the monks and friars of the day.

Traditionally, since the days of Chaucer, friars have been fair game for their monastic lapses from strict self-denial into avid partaking of worldly pleasures. The closed community of a monastic order was seldom to be penetrated by the ordinary man and it was therefore all the more fascinating to him – these satirical paintings found a welcome audience among people from all classes.

Studying at the Academy of Beaux-Arts in Florence, Claudio Rinaldi enjoyed considerable success during his lifetime, exhibiting from 1884 in Turin and Florence.