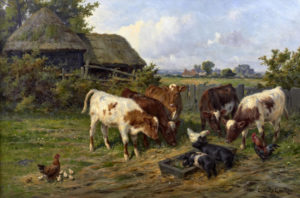 Born in 1864, to the artist Samuel James Clark and his wife Maria, Claude Cardon Clark,was perhaps the most successful of the Clark family. He was named Claude Lorraine Clark after the 17th century master landscape artist Claude Lorraine, but from 1892, he used the pseudonym Claude Cardon, after his painting ‘A Family of Three’ was exhibited in the Royal Academy.

Claude Cardon had studios, first in Islington and then in Camden, painting traditional rural scenes with loggers, blacksmiths and farmyards full of animals. His paintings were idealised country scenes, increasingly concentrating on calves, pigs, chickens, geese and puppies. The charming painting ‘The Intruders’, shows us Claude Cardon’s work at its’ very best – the cheeky pigs, greedily feeding from the calves’ trough, while the calves patiently look on, watched by a family of a cockrel, hens and chicks. The scene is one of nostalgia, with the thatched outbuildings and the farmhouse in the distance, sitting solitarily in the unspoilt countryside. Cardon would have found a ready market for his paintings, with the rise of the industialists, who having migrated from the countryside to the cities, were building their grand villas and furnishing them with fine furniture and paintings of the country scenes reminiscent of the tranquil countryside they had left behind.

Claude Cardon enjoyed considerable success during his lifetime, exhibiting at the Royal Academy 1893-1913, Liverpool’s Walker Art Gallery, the Manchester City Art Gallery and with the Royal Society of British Artist’s at Suffolk Street, London. However, not being elected to the membership of the Royal Academy, remained one of Claude Cardon’s greatest disappointments.

The Clark family were a truly artistic family – his father an artist, his two brothers, Ernest and Cuthbert professional violinists, with Claude himself, as well as being  a successful artist, an accomplished musician, playing the violin, viola, cello, clarinet and piano.