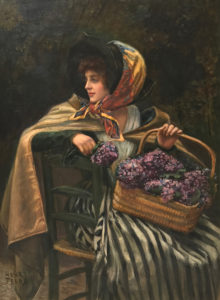 Charles Henry Tenre grew up in the wealthy suburb of Saint-German-en-Laye and by the early 1880s, Tenre was already studying in Paris at the Ecole des Beaux Arts. It was a time of great change and opportunities for a young artist, with the rapid growth of commercial galleries, modelled on those in London. These new galleries were eager to represent talented artists and they hosted exclusive opening receptions for the emerging bourgeoisie, looking to furnish their grand interiors with fine art.

The period between the Franco-Prussian and First World wars was known as La Belle Epoche, a period where fashion and the arts flourished. In 1883, starting to sign his paintings ‘Henry’ Tenre, rather than use his full name, the young Henry Tenre  began to exhibit his paintings at the newly formed Societe des Artistes Francais, under the presidency of William-Adolphe Bourguereau, the ‘Societe’ was free from the constraints of government. Henry Tenre mastered the art of traditional genre imagery with its sentimental content and emphasis on luxuriant fabrics, colours and texture.

Exhibited in the Paris Salon  in  1913, La Marchande de Violettes, is a wonderful example of Henry Tenre’s fine work, executed on a grand scale, he has painted the young woman, resplendent in her striped skirt, seated on a chair, wistfully glancing over her shoulder into the distance. A basket of violets, is resting on her lap – violets are traditionally flowers of modesty, and allude to a love that is delicate and pure, making them popular gifts for a young man to give to his sweetheart. La Marchande de Violettes is a romanticized narrative – the young woman is dressed at the height of fashion, her striped skirt and bonnet, more favoured by the elegant, high-class ladies found in the paintings by his contemporary, James Jacques Tissot, than a lowly flower seller, leaving the viewer to form a personal interpretation of the painting.

Henry Tenre enjoyed both commercial and academic success during his lifetime – his work was recognized with a commendation at the Salon of Societe des Artists Francais in 1891and again with a silver medal in 1911. In 1900, he was honoured with a bronze medal at the Exposition Universelle in Paris and with the Legion of Honour award. Henry Tenre also designed numerous theatrical sets in addition to his paintings.

Henry Tenre continued exhibiting after World War 1 and died in Paris in 1926.