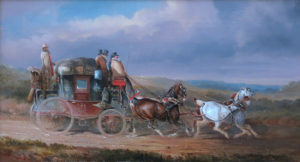 Charles Cooper Henderson was a British painter born in 1803. He is considered one of the greatest coaching painters of the 19th century. His father was John Henderson, born in 1764 and died in 1843. He was considered an amateur artist and patron of Girtin and Turner. George Keate was his grandfather. He was born in 1729 and died in 1797. Grandfather Keate was a distinguished man of letters and his brother, John, was a great collector of art.

“…His mother’s father was George Keate, a landscape artist whose work had been shown at the Royal Academy as an Honorary Exhibitor. Keate lived in Bloomsbury, corresponded with Voltaire, whom he had met, and was a renowned antiquarian and coin collector. Georgiana Kate, his only child, was born in 1770 and grew up to be an accomplished artist as well, an Honorary Exhibitor at the Society of Artists. She married John Henderson, a Bachelor of Civil Law, who had inherited a house in the fashionable Adelphi Terrace section of London nine years earlier. John and Georgiana soon tired of London and moved twice over the next few years. It was in Abbey House at Chertsey, Surrey, that Charles Cooper Henderson was born on June 17th, 1803, as Britain nervously awaited the arrival of a French armada from the Continent. It never sailed, and soon the Hendersons were back in London, occupying a Georgian home on Montague Street. It was here that Cooper (as he was known to the family) grew up. John Henderson, a watercolorist himself, had become a patron to others working in the medium, and as Cooper and his elder brother John began to grow older, drawing master Samuel Prout was engaged to tutor them in the art. At the age of 14, Cooper matriculated at Winchester College. It was during these school years that he was introduced to the stage coaches that would become his subject…”

Charles Henderson married Charlotte By in 1829. His father was not in favor of this marriage and disinherited Charles. Charles Cooper Henderson made his own way and exhibited at the Royal Academy in 1840. Many of his works were published by Ackermanns and Fores. In time, the coach era finally ended. The technology that had nurtured Henderson eventually had ended. The coaches vanished and Cooper Henderson, a widower, went into retirement, lived comfortably, and died in Shepperton on August 21, 1877

There’s a listing of the few places Henderson’s work can be seen today. London’s Tate Gallery has three, as does the Victoria and Albert Museum. The British Sporting Arts Trust owns two. There are four in Folkestone, two in Hull and two in Bath. In the United States, the Paul Mellon Foundation has a cornucopia – fifteen. South Africa has eight.

Bibliography:  Cooper Henderson and the Open Road by Charles Lane