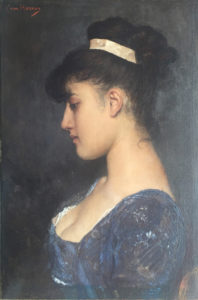 Cecil van Haanen visited Venice in 1873, and it was during this period that he painted this stunning study of A Venetian Girl. At this time, throughout Europe there was a great fondness for the tradition of the depiction of beauty, as gentle, sweet and somewhat coy. For the first time large numbers of pictures were painted whose sole raison d’etre was the depiction of such beauty; not so much in the form of specific portraiture, but more as a homage to feminine beauty in its own right. Essentially, they were images created not to flatter the sitter, but to please the eye of the beholder.

Cecil van Haanen has painted the beautiful young Venetian girl, set against a muted background, to compliment her skilfully executed skin tones, her hair is casually held up by a gold band, with wisps of hair escaping onto the nape of he neck and framing her face. With the simplicity of the composition and the enigmatic poise of the girl, the artist has faithfully reproduced the image of the demure sitter.

Cecil van Haanen exhibited at the Paris Salon, winning medals in 1876 and 1878