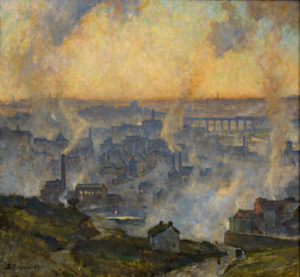 Bertram Priestman was born in Bradford, Yorkshire in 1868. He first exhibited at the Royal Academy in 1889, and from that time until his death in 1951, he gained a reputation of one of the most eminent painters of his time.

Sunset in the West Riding, painted and exhibited at the Royal Academy in 1943, is perhaps one of Bertram Priestman’s finest and most significant oeuvre as an artist. The view of the Vale of Huddersfield, with the factory chimneys belching out smoke into the air, mingling with the dense masses of moving clouds, and illuminated by the warm evening glow of the sunset, confirms Sir Frank Brangwyn’s observation that Bertram Priestman was the “finest sky painter of our day”. Indeed, to Priestman ‘skies may fairly be described as the keynote of landscape painting’. A steam train is crossing the impressive Lockwood viaduct, in the distance, and lights twinkle from the dark satanic mills, working late into the night, supplying machinery and cloth for the war effort.

Bertram Priestman’s father was a Bradford businessman and also a noted art collector. He was brought up in a house filled with fine paintings and this undoubtedly helped influence his future. After leaving school he visited Italy, Egypt and Palestine, and after a brief period studying engineering, he decided to become a professional artist and moved to London where he studied at the Slade. He exhibited his first picture in the Royal Academy in 1890, but this was followed by six years of non-acceptance, leading Priestman to later muse  “I rather fancy I was too advanced in my ideas for this body at that time”.  However, the International, the New Gallery and the New English Art Club were more than willing to hang his paintings and in 1896 his work was finally accepted again at the Royal Academy. He was elected Royal Academician in 1923 and he exhibited continuously at the Academy until his death in 1951. Bertram Priestman was highly esteemed by his fellow artists, including Sir William Russell Flint, Sir Gerald Kelly, Sir George Clausen and he exhibited alongside Corot, Degas and Boudin at the Goupil Galleries in 1909. Bertram Priestman is credited with encouraging Edward Seago to continue painting, at a time when he was uncertain of his future as an artist and Priestman provided one of the major influences on Seago’s subsequent career.

An advocate of painting ‘plein air’, Bertram Priestman was aware that landscapes produced in a studio ‘gradually tend to possess that indoor appearance’. He was a diverse artist, but it is his landscapes, dominated by the sky, for which he is best known. Bertram Priestman used bold brushstrokes, reveling in the exercise of free flowing line provided by oil paints, and he produced some marvelously atmospheric paintings. In contrast to the idealised and often sentimental depiction of the landscape by his predecessors, Priestman’s work stands out as virile, and real.

The Cartwright Hall in Bradford have the painting The Heart of the West Riding, exhibited at the Royal Academy in 1916 in their collection. This fine example of his work, and of the same view as Sunset in the West Riding, compares very favorably with it. Very few of his works have come on to the market in recent years, and those that have not done him justice, and for that reason, outside his native Yorkshire, he is today, probably one of the most underrated artists of his day and ready to take his rightful place in the art market.