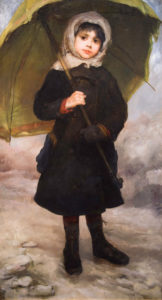 The artist August Kurz was born in 1856 in the Swiss market town of St. Gallen, and in memory of the Burg Gallenstein in his homeland, and to distinguish him from his brother, Arthur Kurz, who also was an artist, he added the suffix Gallenstein. From an early age he showed a great aptitude for art and in 1878 he attended the drawing academy in Graz, before studying at the Academy of Fine Arts in Munich, where he earned a good reputation as a painter of genre, portraits and landscapes.

This delightful painting Le Parapluie Vert, depicts a young girl, with engaging big brown eyes, sheltering from the weather under an oversized green umbrella. She has the most wistful eyes and unlike a portrait where the viewer is looking at the sitter, August Kurz Gallenstein’s little girl is looking at you! Wrapped up in a warm coat, a head scarf to keep out the chilly weather, woolley stockings and laced-up boots she has paused in the snow, possibly on her way to school and the artist has captured this moment in the most sympathetic way. The muted palette of the simple background provides a perfect backdrop to this study of the pretty young girl and the green umbrella is a perfect frame for her face. August Kurz Gallenstein has carefully thought out and executed his subject and his ability to paint the skin tones and features, highlighted by light and shade,  can be favourably compared to the work of the great French artist Bouguereau.

In November 1900, after many successful exhibitions and several large study trips abroad, August Kurz Gallenstein settled permantly in Admont, where he dedicated his artistic activity to his monastery – allegedly a failed love affair was the cause of his retreat into monastic life. He worked there as a court painter, designed and renovated numerous frescoes in the monastery and surrounding area. Many of his oil paintings, sketches and writings were kept in Admont, where they were exhibited and preserved for poserity. Sadly, following an injury to his left eye, his eyesight and sense of colour gradually faded and his artistic work came to an end. August Kurz Gallenstein died in Admont in 1916 after a severe case of pleurisy.

In 2006/2007, some of his works were shown in the Neue Galeries Graz – the exhibition ‘On the Nature of Man, Genre Painting’ also included works by other great German artists, including Ferdinand Georg Waldmuller, and later in 2014/2015 the gallery in Graz, exhibited more of August Kurz Gallenstein works in the exhibition ‘Departure in the Modern Age’.